Well, the Christmas season has pounced upon me once again this year. I made the mistake of heading out on Black Friday, mind you not for shopping, but because I wanted to see a movie. What a mistake. It was a complete zoo. So I opted to watch a DVD, and mull over things that nerds could buy online rather than braving the walmart-esque conditions in the real world. I mean really, why do I have to leave the safety and comfort of my apartment to shop for my closest friends and relatives? I don’t.

And so without further ado, I give you the list of 10 things that nerds simply shouldn’t be without for x-mas. Well everyone should at least get one of these, hint hint.

(Also, as a disclaimer, this page is probably full of blatant lies. But hey, I like to project my reality, not yours.)

10 – The Xbox 360I really hate to list this thing. Its a monster. I really don’t like Microsoft, and modern consoles are somewhat lost on me, but man, the cool factor on this thing is off the charts. Some people complain about there only being 18 launch titles, but can you name me one other system that has launched with 18 titles? I thought not.

The titles that I have seen so far have clearly not showed off the power of this fully operational battlestation, but the games do look amazingly sharp. I played some of Call of Duty 2, and it was pretty swank. My one gripe of course, is that no one can find one of these things. Apparently they’re a hot commodity, which is why I chose to link to ebay for this one. I mean, paying 2 to 3 times the going price sucks, but isn’t that what x-mas is all about?

9 – JVC Everio Hard Disk Camera I put this little number low on the list simply because of the price. I mean, spending $1000+ on a digital camera/videocamera is a bit extravagent, but man. I’ve been waiting for a videocamera that didn’t record to crappy analog medium, or require you to carry around disks or anything like that, and finally, its here. I happen to own an earlier model of one of these that only records 4 hours of video and has a slightly different form-factor (the price of being an early adoptor) but I can personally tell you that these things are sweet.

An even nicer feature than freedom from medium, is that the files this thing uses can be edited in the included software without re-encoding the whole video. What does that mean? You can splice, split, merge, to your hearts content, and the saving is accomplished instantly. Whats more, you can burn this file directly to your favorite medium and watch in on your DVD player. Nirvana is here for digital camera-philes.

8 – X GamestationAndre LaMothe is a personal hero of mine, from his gamedev.net roots, to his adventures in book publishing, he’s done everything I have ever wanted to. Including making his own videogame console and book!! Thats right, Andre has made an old-school videogame console with the like minded engineer in mind.

The console comes with everything you need to understand all its innerworkings and begin writing videogames on it. Its a smidge pricey at $199.95, but come on. Its all in the name of education! I’ve been good this year, and I’ve got a degree in engineering, what more can you ask for?

7 – Nintendo DSLets be honest, this thing is not exactly sexy. Its kinda bulky, has that old 80’s silver color, and just doesn’t look cool when its flipped open and being played. And now onto the good stuff: everything else! I seriously love my DS. Thankfully Santa had the foresight to get me one last year, but for those of you that don’t own one of these things, get your butt in gear! There are finally some really good titles out there to enjoy. Gone are the days of the hasty ports. The days of Nintendogs, Mario Kart DS, and Castlevania: Dawn of Sorrow have arrived. 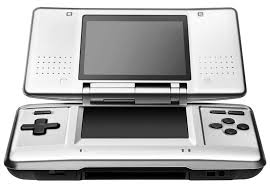 One thing I really like that few people seem to mention is that Nintendo has cooked up some sort of surround sound using only 2 speakers. Alot of games feature sound effects that make you nearly turn your head. And another thing….the screen is amazing. It even gives your old Gameboy Advance games a new lease on life. So put down that gimmicky PSP and get one of these.

6 – A subscription to MakeThe nerd inside me has wanted to order a subscription to this quarterly magazine since its inception, but the frugal side of me says that I can’t afford to order it or make any of the cool projects inside. Basically this magazine consists of cool hacks and hardware mods to things you might own, original designs, and do-it-yourself projects that engineering minded people enjoy reading about.

I really like that you can back-order issues online, since I have yet to order any. Another nice feature, thats not necessarily in the magazine, is the Makezine Blog (I hate that word.) Its updated almost everyday with links to Makers all across the web who share a passion for tearing crap apart and then adding fans and lights to it. I can’t wait to get my first copy….which has yet to happen.

5 – Duuhhhh, an iPodI hate to be captain obvious here, but come on. My family got me an immitation iPod for my birthday last summer, and I loved it. I continue to love it in fact, but I will always desire a genuine iPod. These things sexiness factor is just off the charts. At first, I scoffed at the circular menu selector, but after using one, I fell in love. The screen on an iPod is amazingly crisp, and displays the album art in its full color glory. 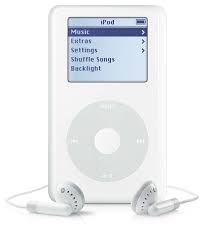 The other curious side effect of owning an iPod is the iTunes Music Store. Apple apparently did some real begging and pleading to the music industry and the RIAA to bring you songs priced at only $.99 each. This still isn’t cheap, but you can at least afford to collect some of those singles you want without buying the other 12 crappy tracks on My Chemical Romance’s new cd. So in case you’ve been under a rock for the last 2 years, put one of these things on your list, seriously.

4 – OQO model 01+If you know me personally, you know that I like cool things that come in small packages. I own a teeny Sony Vaio laptop that has served me well, but when I first heard about this thing, I was blown away. This is basically the worlds smallest laptop, or as the people at OQO are calling it, a palmtop. Not quite a palm, and obviously, much smaller than anything you’d set in your lap.

It features a 1Ghz processor, 512 megs of RAM, and a 30 Gig hard drive. Not to mention wireless internet, and expandability out the wazoo. Basically, this thing is meant to be a computer you take everywhere. It runs full blown Windows XP(cough) and can be hooked up to a normal VGA monitor, keyboard, and the like. So you can take it from work to home, and never have to worry about how you’ll get your data (aka porn) from one spot to the other. The one big downside is the price….at $1899 for the cheapest model(with XP Home, rather than Pro) it might be the only thing Santa can afford for you this year, but here’s hoping.

3 – TVistoI recently read a review for this thing on OSNews. Basically for $149 you get a hard drive enclosure. Big deal you say? Where’s the hard drive? Well, if you buy one of these, and stick an old HD you have laying around in it, you get a USB 2.0 drive an oh-so-much more. This thing is a media hub!

Basically you can drag any music, video, or pictures you want onto the hard drive, and then hook it up to your TV and watch and listen. Doesn’t sound so great? Read on. The TVisto comes with a remote control, so after you rip all your DVDs and load it up with porn, you can set it near your entertainment center and sit back and watch from the comfort of your couch and use it just like any other video device. To me, this is a great revelation. It even supports Divx, MPEG4, and a slew of other video formats that any competing device has yet to touch. If that confuses you, just pick one of these up and put it under my x-mas tree. I won’t complain, I promise.

2 – BlackdogThis one totally caught me by surprise folks. I just read about it the other day. Its a USB powered “server” computer that can run native Linux applications on your Windows or Linux powered computer. I know that sounds a bit technical, so I’ll break it down. You simply carry this 1.6 oz. computer around with you and plug it in wherever you go, eliminating the need for memory sticks or seperate email accounts or any of that jazz. Not to mention that it runs a form of Debian Linux.

It has a 400 Mhz PowerPC processor, 64 Megs of RAM, and from 256 to 512 Megs of storage(depending on price.) Speaking of which, you can lay your hands on one of these for only $199, with the upgraded version costing $239. And of course, its expandable via MMC cards. One last cool feature is that the Blackdog features a fingerprint reader for security, so once its set up, only you can use it….or possibly anyone who cuts off your fingers. I am really wanting one of these things so I can cross develop Linux apps while at work or on the go. Here’s hoping!

1 – Ubuntu LinuxYup. Say it twice. Its an odd word to be saying, but this item tops my list for 2 reasons. First, its free. Totally freakin’ free. They’ll even mail you a pressed CD at no cost at all. Not only that, but you can download it and burn it for free. And whats more? It’ll always be free. The second reason, of course, is that this single operating system is going to liberate computers around the globe from the tyranny that is the proprietary OS!

Ok, so maybe I’m being a little over zealous. Most people reading this are using Windows of some sort. And whats more, most of you don’t know about the difference between a Mac or a PC. Why should you care you say? Because choosing something like Ubuntu that is totally free will help bring the user back into the PC world, rather than the corporation. There are probably a million reasons to use Ubuntu, but the real one is that it can do everything that Windows does (and more!!) and does it beautifully and easily. I’m willing to bet that after a one week trial period, any of you could be using it full time, just like I do.

Thats right, I don’t run Windows at all. I enjoy my liberated life. I paid for my computer, and didn’t have to pay the $299 Microsoft tax for Windows XP. So please get your friends a copy of this for x-mas. I mean, come on, its free! You can’t go wrong. And even if they don’t like it, they will have at least tried it. Download a copy of the Live CD (a version that runs from the CD so you can test it out before installing it full time) and enjoy taking a walk on the free side.

Well fella’s, that about wraps it up. I tried my best to compile a list that might help provoke some thoughts for the nerd you all know and love (and respect?) Feel free to leave me some comments so I can tidy anything up or add suggestions. I would love to hear some feedback.